5 Red Flag Behaviors That Point to a Debt Problem

Is debt ruining your life? For so many people, the start of a new year does not signify the chance at a new beginning or a fresh start. Rather, the start of a new year means a barrage of holiday credit card bills for thousands of people drowning in unsecured debt. Maybe you plan to pay off your holiday-related bills each year with your income tax return, so you do not believe you have a debt problem. However, if you live beyond your means in December, because you plan to catch up in March or April, you might actually be dealing with a more serious debt problem than you are willing to admit.

When facing a personal debt crisis, many people share similar types of behaviors. These common red flag behaviors point to either a current financial crisis or an impending debt problem looming on the horizon. If any of the following behaviors sound familiar to you, you are likely dealing with a debt crisis that needs to be solved before you can begin living a life free of financial drama. 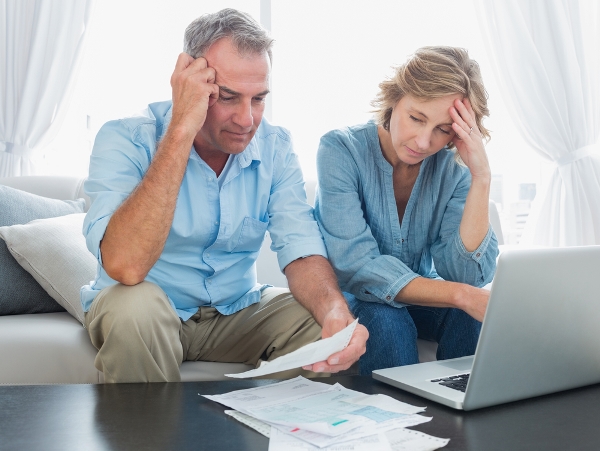 1. Vagueness: Often, when people are in over their heads in debt, they fear reality. This means they may avoid looking at checking account balances, leave overdue bills unopened, and do not know the actual amounts owed to credit card companies. The longer they avoid knowing the reality of their debt situation, the harder it is to begin turning it around. This kind of avoidance has a way of turning into very real fear.

2. Buy Now, Pay Later: A telltale sign that points to problem-spending is the "buy now, pay later" mentality. As mentioned earlier, people who rack up their credit cards for holiday shopping often justify it by saying they will pay off the balances at tax time. However, this usually does not happen because, by the time their income tax returns arrive, that money has already been earmarked for ten different things. For people with a debt problem, the "buy now, pay later" approach often turns into a "buy now, worry later" reality.

3. Living on the Edge: No one enjoys teetering on the edge of losing their electric service every month. It is not uncommon for problem-debtors to regularly receive disconnection notices from their utility companies, internet providers or cable companies. After paying their multiple credit card bills, loan installments and other debt payments, there never seems to be enough money left to actually pay the entire utility balances owed. Typically, when these disconnection letters or service interruption notices arrive in the mail, they manage to scrape together just enough to pay the minimum amounts required to keep their services connected for one more month. Unfortunately, this is a never-ending cycle because they usually find themselves in the same boat again next month.

4. Phone Avoidance: This is probably the single-most common red flag behavior shared by most people facing a debt crisis. After months or years of constant debt collection calls, they have learned to avoid the phone like the plague. If the number on the caller ID is unfamiliar, they automatically let it go to voicemail. Some problem-debtors even resort to unplugging their phones or turning off the ringers because they do not want the constant reminders of their debt problems. On a related note, unfamiliar knocks at the door can instill this same kind of fear and avoidance in problem-debtors.

5. Picture-Perfect Finances: Until problem-debtors get real about their situations, most of their friends, family and colleagues are under the impression that their financial lives are picture-perfect. Compulsive debtors and spenders are masters of disguise when it comes to the way they portray themselves to the rest of the world. Many times, they drive nice cars, wear designer clothing and carry luxury handbags. Problem-debtors are often the first ones to pay the bill for everyone at lunch or buy a round of drinks at the bar. Their worst nightmare is for a business partner to catch a glimpse of their ATM receipt, or for a friend to see the stack of overdue bill notices sitting on their kitchen counter at home.

Although this is certainly not intended to be a complete list of red flag behaviors signally a debt crisis, these are five of the most common behaviors displayed by problem-debtors. If you were able to relate to at least one of these behaviors, it might be time for you to get real about your debt situation. You have options, no matter how deep your hole of debt might be right now. Whether you choose to set up payment plans with your creditors, file for bankruptcy or consolidate your debts, all that really matters is that you begin taking steps now to solve your financial crisis.

It will not happen overnight. Becoming financially solvent takes discipline that may feel more like deprivation to you, in the beginning. Living within your means might be difficult for awhile because your financial means will probably be quite small. However, as you begin paying off your debts, you will feel a freedom like you have never felt before. Imagine receiving a paycheck that is not already spent before it even hits your checking account. As hard as it may be to believe right now, that is the new reality that awaits you.


* Specific loan program availability and requirements may vary. Please get in touch with the mortgage advisor for more information.

CityWorth Mortgage LLC strives to ensure that its services are accessible to people with disabilities. CityWorth Mortgage LLC has invested a significant amount of resources to help ensure that its website is made easier to use and more accessible for people with disabilities, with the strong belief that every person has the right to live with dignity, equality, comfort and independence.

CityWorth Mortgage LLC makes available the UserWay Website Accessibility Widget that is powered by a dedicated accessibility server. The software allows www.cityworth.com to improve its compliance with the Web Content Accessibility Guidelines (WCAG 2.1).

CityWorth Mortgage LLC continues its efforts to constantly improve the accessibility of its site and services in the belief that it is our collective moral obligation to allow seamless, accessible and unhindered use also for those of us with disabilities.

Despite our efforts to make all pages and content on CityWorth Mortgage LLC website fully accessible, some content may not have yet been fully adapted to the strictest accessibility standards. This may be a result of not having found or identified the most appropriate technological solution.

If you are experiencing difficulty with any content on CityWorth Mortgage LLC website or require assistance with any part of our site, please contact us during normal business hours as detailed below and we will be happy to assist.

If you wish to report an accessibility issue, have any questions or need assistance, please contact us by sending an email to: info@cityworth.com